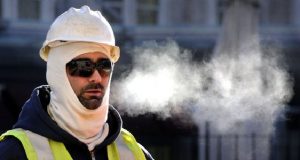 The nation’s record-breaking “polar vortex” cold snap last month reinforces the need for businesses to reduce the risk of injuries or accidents to employees working out of doors under winter conditions. The human body has a core temperature of 98.6°F. Unconsciousness can occur at 86°F, and death below 73°F. Symptoms of a dangerous temperature decrease include persistent and severe shivering, fatigue, lack of co-ordination, drowsiness or apathy, hallucinations, resistance to help, and skin that turns blue before becoming pale and dry.

Employees working outdoors in extremely cold weather face two major health problems: frostbite and hypothermia. Frostbite freezes and crystallizes the fluids in body tissues and cellular spaces, which causes blood clotting and reduces the flow of oxygen to affected areas and deeper tissues. Hypothermia develops when the body can no longer maintain its core temperature and attempts to reduce heat loss by shutting down blood flow to the skin, arms and legs, as well as shivering to increase internal heat.

To help protect your outdoor workers against these risks, make sure that they:

work during the warmest part of the day, as much as possible