An Alert Driver is a Safe Driver 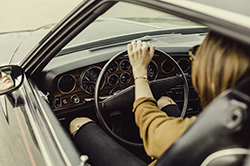 Going for a drive or riding in a car can be a relaxing experience, but drivers need to remain alert when behind the wheel. Although anyone could fall asleep while driving, certain target populations are more prone to having accidents because of falling asleep.

For instance, men are twice as likely as women to have an accident due to drowsiness. Teenagers, who love burning the candle at both ends, are another group with the potential to doze off while driving. In fact, teenagers and their 20-something counterparts are less likely to admit to being too fatigued to drive and will often get in the driver’s seat, even if they shouldn’t.

Naturally, there are work-related reasons that contribute to falling asleep while driving. Shift workers who work nights or rotating shifts often have trouble sleeping because their inner clock may be off kilter. Commercial drivers have an increased exposure to accidents as a result of driving during the late night and early morning hours when their biological clock tells them that they should be sleeping.

What can you do to help prevent yourself or a loved one from becoming a statistic? The best solution is a nap that lasts for about 20 minutes before you drive. Although many Americans do not allocate time for an afternoon rest, napping is a normal part of the human sleep-wake cycle. There is a biological tendency to fall asleep in mid-afternoon.

In certain parts of the world, mid-afternoon activities are brought to a halt so that people can take advantage of their natural tendency to sleep. This kind of nap that is taken before the afternoon work period begins is looked upon as a restorative activity, not idling away time that could be better spent doing other tasks.

Napping is even more important if your sleep is disturbed the night before, or you actually slept for fewer hours than your body requires. Napping the next day can help relieve your sleepiness and enhance your ability to remain alert.

The other factors to remember are that most sleep related accidents happen in non-urban areas, generally on roads with 55 mph-65 mph speed limits. When combining the restful quiet of a suburban setting with the steady pace of that speed limit, you have the makings of a situation in which a driver could easily be lulled into sleep. Also, the early morning hours are a particularly vulnerable time for drivers on extended runs.

The best remedy for these conditions is periodic rest stops in designated rest areas. Interrupting your driving for a 20-30 minute nap can make all the difference in restoring your alertness and your responsiveness. Avoid becoming a grim highway statistic. Take the time you need, and protect yourself and others on the road.