Devices We’d Rather Not Become “Smart” 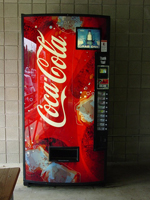 The Internet of Things is one of the most exciting things happening in technology today. How can you not like the idea of an air conditioner that checks in with a weather site, and automatically turns itself up just before a heat wave hits, or an HDTV that tracks your favorite shows and makes appropriate recommendations? That said, there are some devices that are just fine the way they are, for instance…

If vending machines are going to be brought into the IoT, here’s the only feature we want: the ability to tell the supplier when the machine is down to nothing but a few bags of raisiny trail mix and some stale peanut butter crackers. Here’s what we absolutely do not want: For the vending machine to communicate with our Fitbit and refuse to give us the Snickers bar we asked for. If we wanted a smarter way to indulge in junk food, we wouldn’t be eating junk food.

We’d simply rather there not be a database somewhere collecting information on which body parts we’re shaving. The moles on a man’s back are his business and his alone.

There’s nothing wrong with a smart fax machine, per se. The issue is simply that most of us wish fax machines would just disappear forever already, and keeping them up to date with modern technology would be a roadblock on the way to phasing them out forever so that we never again are forced to scour the city for a library with a fax machine so that we can send something that we could have just emailed.

Microphones, tape recorders, video cameras, yes, we have these all attached to our phones, but there are plenty of obvious reasons why we would want to keep some of these devices offline. In the debate on personal privacy and user consent regarding IoT-connected devices, it stands to reason that there’s some content we would rather not go public until we decide that we want it to go public. The cloud is not inherently less-safe than local storage, but all the same, the double edged-sword of the IoT is that, all too frequently, we trade privacy for convenience.

This list is somewhat tongue-in-cheek, but even so, we’re still adapting to the Internet of Things, and sometimes we let our excitement over new technology get the better of us.