The Importance of Proper Safety Training 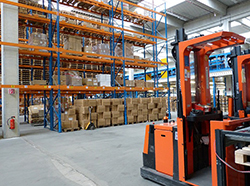 This real-life case reinforces the need for every business to provide OSHA-required training.

A West Virginia company assigned a new employee – call him Jim – to drive a forklift, even though he had no experience or training in forklift operation “There’s nothing to it,” his supervisor told Jim. “It’s just like driving a car.” However, his first few weeks on the job turned out to be bumpy. Several times on each shift, while driving the forklift, he would knock things over. Although the supervisor warned Jim to be more careful, he continued to bump his way through the workday, leaving a trail of destruction wherever he went.

About three weeks after being hired, Jim’s supervisor instructed him to drive down a narrow aisle between two rows of stacked, loaded pallets. After objecting, Jim reluctantly proceeded down the aisle. His left foot, which was dangling outside the forklift where it shouldn’t have been, became pinned between the forklift and the wall of pallets. Jim suffered multiple fractures of the foot, together with a badly twisted knee; both injuries required surgery. Instead of going back to work, Jim went to court, filing suit against his employer and his supervisor for negligence.

His argument was clear: The company and his supervisor failed to provide safety training that could have prevented the accident. Jim’s attorney told the court that, although OSHA regulations mandated specific training, testing, and certification for forklift operators, the company had not trained, tested, or certified him. This meant that Jim should not have been operating a forklift – and if he hadn’t been doing so, the accident would not have taken place.

The Supreme Court of Appeals of West Virginia agreed, ruling there was sufficient evidence to prove that both the employer and the supervisor were negligent. When they hired the employee; they knew that federal law required proper training or certification of forklift operators. Allowing Jim to drive a forklift without proper training was an act of negligence.

The message: Failure to provide OSHA-required training is a huge mistake. Whenever you hire new employees or assign workers to new jobs with new hazards, make sure that they receive proper training from the get-go. Never allow an employee to operate dangerous equipment or perform any other hazardous job until they have completed the required training and demonstrated competence, as well as understanding the hazards and necessary precautions.