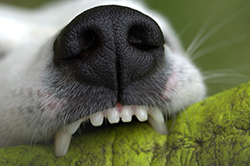 One company alone, State Farm, paid more than $109 million in Homeowner claims related to bites. California – which has more people and dogs than any other state – led the nation with 527 State Farm claims costing more than $20 million, followed by Illinois, Texas, and Ohio. The nationwide average claim was $28,800.

Dogs bite some 4.7 million Americans a year, nearly half of them children, Nearly 400,000 of these bites require medical treatment – and an average of 16 result in death.

Children age 5 to 9 are the group most likely to be bitten. The ASPCA predicts that one of every two children in the U.S. will suffer a dog bite before he or she turns 12, in most cases by their own dog or a pooch owned by a friend or neighbor. Seniors are the next most vulnerable group, followed by mail carriers. Dogs bit some 5,600 USPS carriers in each of each of the past two years, costing the Postal Service more than $1 million worth of medical bills in 2011.

Heredity, socialization, training, physical condition, and activities of humans can all affect the animal’s propensity to bite. Because children are by far the group most vulnerable to dog bites (a child is 900 times more likely to be attacked than a letter carrier) the ASPCA recommends that youngsters should never:

Maintain eye contact with a dog
Go near a chained canine
Approach or touch a dog who is eating, sleeping, or off-leash
Scream or run if an off-leash dog approaches
Pet a dog without asking its caregiver for permission (it’s wise to have the animal sniff your closed hand first – many dogs perceive an open hand as threatening)
Approach a dog from above its eye level