Sci-fi Concepts That Are More Sci Than Fi 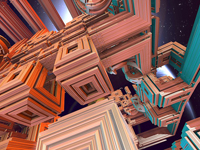 It’s getting to the point where science-fiction is having a hard time keeping up with science-fact. If you put a sci-fi movie into production right now, the fancy gadgets you have on display might be found in the clearance section of your nearest Wal-Mart by the time the movie is actually released. Here are some devices, gadgets and gimmicks shown in movies that real-life developers have already figured out, or are at least very close to cracking:

The story goes that when Predator was screened for an audience of top-brass military professionals, a high-ranking general pointed to the Predator’s invisibility cloak technology and said “Make that for me.” We’re not quite there yet, but we’re getting closer all the time. It’s a little impractical for combat operations right now, but a group of researchers in Japan have developed a material that can be used to see right through the wearer. It requires a computer and a projector as of now, but the effect is nevertheless stunning.

The challenge with a real life lightsaber is not actually creating a devastating beam of light, but telling that beam of light when to stop. If you want a superpowerful lasersword that will burn holes in your drywall if you’re too careless with it, you can actually put one together with a handful of parts from the hardware store and eBay. Similar projects have been built to launch a “blade” of flaming propane, but let’s be honest: If it’s not a laser, it doesn’t really count.

Repo Men featured Jude Law as an agent who retrieves artificial organs from patients who can’t afford to make the payments. They got one major detail completely wrong: In the future, artificial 3D bio-printed organs are not going to be expensive enough to justify paying Jude Law a commission to go get them back. As of now, an artificial heart costs around $125,000 and an annual maintenance fee of $18,000. However, as 3D printing becomes the norm, the cost is going to be driven way, way down, and bio-printing is no exception.

The Navy is currently using a laser, known as the LaWS, Laser Weapons System, powerful enough to destroy boats and drones. And it’s operated with a video game controller.

There have actually been stories of filmmakers and science fiction writers being contracted to help develop new technology for the military and other organizations. There’s a fun documentary available on Youtube showing how everything from the modern cell phone to voice recognition technology and even cyborg implants were inspired by their developers’ Star Trek fandom. Today’s wild idea is tomorrow’s DIY project you can throw together in your garage.

Devices We’d Rather Not Become “Smart”