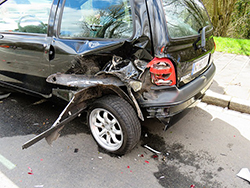 Many think of fraud as a non-violent crime. In reality, vehicle insurance scams, including staged traffic accidents, are far from non-violent. Aside from costing honest consumers hundreds to thousands of dollars in added insurance premiums, this steadily growing form of fraud has resulted in countless injuries and deaths to innocent victims of the scams. In fact, data from the NICB (National Insurance Crime Bureau) shows that staged traffic accidents have rapidly become a leading source of insurance fraud nationwide.

How Does It Work?

These criminally staged collisions frequently involve several suspects driving a car. The victim is the driver of another vehicle that’s being targeted by the suspects staging the collision for their own financial gain. The suspects will most often use one of two techniques:

Two or more suspects drive two different vehicles. They target an unsuspecting vehicle, most often an older model that only contains one victim. This is done so that there will not be any witnesses to the collision. The one or two suspects in the squat vehicle position their car in front of the vehicle driven by the victim. They slow to create a smaller space gap between themselves and their victim.

The Drive Down or Wave On.

In this version, the suspect(s) are stopped at the entrance to a parking lot or an intersection. They wave on or yield the right-of-way to the victim. When the victim proceeds, the suspect intentionally accelerates to collide with the victim.

What Can Drivers Do to Reduce the Risk of Being a Victim?

Stay aware of your surroundings, paying close attention to what the vehicles several in front, behind, and beside you are doing and maintaining sufficient room between you and all other vehicles. Use caution when making a turn in front of another vehicle, even if they yield the right-of-way.

Since suspects tend to look for innocent drivers that accidentally cross the center line and then sideswipe them, pay close attention to staying within the lines of a lane.

After any accident, count the number of passengers and get their personal information. You might find that more people are listed on the insurance claim than were actually in the accident.

Avoid driving when you’re stressed; preoccupied with a cell phone, map, or food; or lethargic. All of these lessen the care with which you drive and your concentration abilities, thereby increasing your vulnerability.

Have a camera in your vehicle to take photos of the scene, license plates, and the occupants of the vehicle with which you have an accident.

Always call the police and get a copy of the police report. If the damage to the other car is minor, then ask the officer to specify this on the report, as this will make it more difficult for the other party to create more damage for a larger claim.

Alert the authorities if you feel the accident was staged.

In closing, these staged traffic accidents often have criminal elements that reach far beyond just the suspected drivers. It’s often a criminal collaboration among unscrupulous doctors and attorneys who willingly and knowingly assist in the fraudulent insurance claim process.