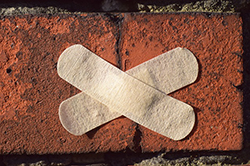 When a contractor works on several parts of a structure, and a mistake they make on one part causes damage to other parts they worked on, does their Liability insurance cover all of the damage, some of it, or none of it? This is the question a Texas court answered in a 2009 decision interpreting the Commercial General Liability policy’s “that particular part” clause. This phrase has been the subject of many court cases because, to some extent, its meaning is in the eye of the beholder.

In the Texas case, the contractor worked on a condominium project. They performed the water-sealing on exterior finishes and retaining walls improperly, permitting large quantities of water to enter the structure through multiple points, including ceilings and walls and under doors. The water damaged other areas of the project on which the contractor had worked, including stud framing and interior drywall. The contractor notified their insurance company, but the company denied the claim because of two policy provisions that exclude coverage.

A second exclusion stated that the insurance did not apply to “property damage to … that particular part of any property that must be restored, repaired or replaced because (the contractor’s) work was incorrectly performed on it.” The insurance company’s intention was to not insure a contractor’s own shoddy workmanship. The contractor sued the company for breach of contract.

The court also found that the second exclusion applied only to the contractor’s exterior work and not to the parts of the interior that suffered damage. It arrived at this conclusion by breaking the exclusion into its components:

No coverage for damage to:

Courts have interpreted these exclusions in various ways, depending on the circumstances of the individual cases. Contractors should be aware that, when they have liability for property damage, their insurance coverage might not be clear-cut. Our insurance agents can give you an idea of how companies providing coverage have handled similar claims in the past.

What is Lender Placed Property Insurance?