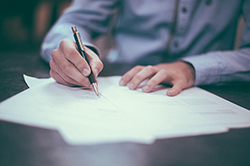 Jacqueline Butler did not receive a promotion from the Texas law firm where she worked, and she suspected that her race had something to do with it. In July 2001, she filed complaints with the Texas human rights commission and the federal Equal Employment Opportunity Commission. The EEOC notified the employer, who responded a month later.

Why did the employer’s insurance not pay for a discrimination claim? Because the employer took too long to submit it.

As evidence, it cited the policy’s definition of a “claim” as “any judicial, administrative or other proceeding against any Insured for any Employment Practices Wrongful Act.” Since the complaints filed with the authorities initiated administrative proceedings, the insurer held that they also constituted a claim. In the insurer’s opinion, the policy did not provide coverage if the employer did not give notice within 60 days of when Butler filed the complaints.

The employer argued that, since it notified the insurer within 60 days of receiving notice of the lawsuit, it had complied with the policy’s conditions. However, the court agreed with the insurer.

Insurance companies do not include this language in their policies simply to get out of having to pay claims. The sooner they know about events that might involve coverage, the better they can investigate and prepare legal defense. As time elapses, witnesses’ memories become less reliable, or witnesses might move away, and memos, e-mails, and other types of evidence might become hard to find.

Also, a claimant who has been kept waiting for a length of time might become angry and unwilling to negotiate a settlement. Therefore, even without a firm 60-day deadline, an insurance company might deny coverage when the insured fails to give prompt notice of a claim.

Courts have not developed a standard for what is “prompt” notice, but they normally consider three questions: How long was the delay? What are the reasons for the delay? How does the delay affect the insurer’s ability to handle the claim? Sometimes, a court will excuse a late notice if it decides the insured had a reasonable basis for believing it was not liable for any harm. However, in a situation where an employee has filed complaints with authorities, the court might not agree that such a belief was reasonable.

The safest course for employers is to notify their insurance companies or agents as soon as they become aware of any type of employee complaints to outside authorities. Even if the employer believes the charges to be groundless, it should put the company on notice. Our professional insurance agents can advise you on what the policy requires it to do when a charge is made. The best time to have that discussion is before something happens.