Complaints Should be Confidential 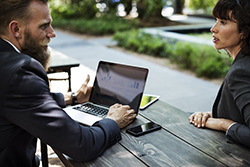 In a Second Circuit case, Karen Duch sued the State of New York for sexual harassment. Duch, a court officer at the Manhattan Midtown Community Court, spoke with a manager who was also an EEO liaison about ongoing harassment.

Duch told the manager, “I’m telling you as a friend;” when asked if she wanted the harassment reported, she responded “Absolutely not.” Because of this request and despite her EEO responsibilities, the manager did not report the harassment to anyone. In ruling against Duch, the court stated several conclusions that employers should consider:

When harassment comes from a co-worker, rather than a supervisor, the employer is held liable only if it fails to provide a reasonable avenue for complaint or to take appropriate remedial action about a problem they know of.

In this case, Duch had reasonable avenues of complaint, despite the fact the EEO liaison was poorly trained and failed to report her complaints to anyone. Duch acknowledged she could seek assistance from at least five different sources, in addition to the manager.

Also at issue was the question of whether her manager’s failure to react could be imputed to the company. The court reminded us this would be the case when: (a) the official is at a high enough level of management to qualify as a proxy for the company; (b) the official has a duty to act on the knowledge and stop the harassment; or (c) the official has a duty to inform the company of the harassment. The court held that in this case, the manager did not breach her duty to remedy the harassment because she honored an employee’s request to keep her complaint confidential. The court also ruled that the conduct had not reached the point that a manager simply cannot stand by, even if requested to do so by the employee.

Unfortunately for the employer, there was another higher-level executive, whose knowledge of the complaints was imputed to the employer. The court stated that when an employee’s complaint raises the specter of harassment, a supervisor’s purposeful ignorance of the nature of the problem would not shield an employer from liability under Title VII. This holds true even where the executive never learned about, and did not witness, the alleged harassment.

In light of their ruling that a jury could find that there was knowledge of the harassment when Duch requested a schedule change from another manager, a jury could also find that their response was unreasonable. A formal investigation of the complaint did not begin until three months later.

Lesson learned: Be very clear about what you want your managers to do when they suspect or know about wrongful conduct:

What should they do if they know about it but nobody complains?

What should they do if somebody complains to them, but asks them not to say anything?

What should they do when things gets so bad that they should say something despite the employee’s request?

How should they approach someone about what they might suspect is harassing conduct?

Should they say something like, “Is Bob harassing you? Should I speak to the EEO about this? If you want me to keep it confidential I’m going to write this down to protect the company and myself. If you feel you need help, bear in mind that I’ll always report it to a proper superior or you can go directly to that person without involving me if you want to.”

As always, we recommend that all HR That Works members use the Employee Compliance Survey every six months. If the company had done so in this case, it could have avoided the second-guessing and engaged in appropriate conduct. To read the case, click here.