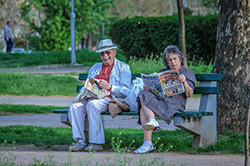 Many soon-to-be retirees find themselves in an anxious state, uncertain of how to face the imminent new phase of their life known as retirement. Fortunately, the results from a recent survey might offer them some guidance and reassurance. Offering a glimpse into the lives of current and soon-to-be retirees, this enlightening survey reveals a few secrets to an enjoyable and financially sound retirement.

For the study, the Consumer Reports National Research Center surveyed 17,877 of their ConsumerReports.org subscribers between the ages of 55 and 75. The survey included participants who were fully retired, semi-retired and others who were still working full-time. However, the results focus primarily on the 6,723 retired participants.

However, many participants said they regret that they didn’t save more for retirement. Approximately 35% said they wished they had started saving earlier and 30% said that they would have put away more money each year had they known what they know now.

But many of the retired survey participants still chose to retire relatively early instead of working longer and building up their retirement savings. The median age of retirement among the surveyed group was 60 years. About a third of the participants retired between the ages of 55 and 59, 38% retired between 60 and 64 and only 18% waited until 65 or later. Those survey participants who were still working said they expected to retire at a later age. Out of this working group, 48% said they planned to retire between 65 and 69 and an unprecedented 14% said they planned to keep working into their 70s. Retiree saving strategies.

The survey also asked current retirees how they saved for retirement. Here are the illuminating results:

This Consumer Reports survey offers convincing proof that the earlier you start saving and the more ways in which you save, the happier you’ll be in your retirement years. Of course, if you’re already in your 40s and 50s and are not saving yet, it’s never too late to start. Based on the lessons from this survey, here are a few saving strategies you might want to consider:

Don’t be too conservative or too risky when it comes to investing. An incredible 57% of the retired survey participants described themselves as “moderate risk-takers.” In other words, although they took a few risks, they did not invest wildly in unpredictable, fluctuating funds such as solid stocks.

If you can, save more than you’re currently saving. As the results from this survey show, many retirees wish they would have put away more each month.

Come up with a smart transitional plan. Although 74% of surveyed retirees said they stopped working altogether as soon as they retired, another one in four said they continued to work at reduced hours, took on a part-time job or started their own business. Obviously, the right choice will be determined by your unique situation — but it’s always best to have a clear plan before retirement.

How to Prepare Financially for Long-Term Care