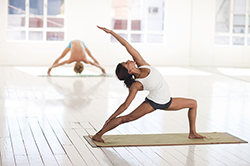 Senior citizens make up the group most affected by stress-related psychological and medical conditions. For such issues, yoga might offer great relief. Recent research shows that it is effective in treating people who suffer from high blood pressure, depression, anxiety and cardiovascular disease. The theory that researchers have might help develop mind-body practices as preventative treatments for such conditions, which are helpful when used with standard treatments.

In their theory, researchers believe that stress is a contributing factor in creating an imbalance in the autonomic nervous system. The result is sympathetic over-activity and parasympathetic under-activity. In addition to this, it causes under-activity of gamma amino-butyric acid, which is an inhibitory neurotransmitter. This transmitter’s long name is often shortened to GABA. With anxiety disorders, there is low GABA activity. Low activity is also present in people with epilepsy, depression, chronic pain and post-traumatic stress disorder. The hypothesis these researchers have could also show why vagal nerve stimulation decreases depression symptoms and seizure frequency.

Although there are differences between the two, Eastern Medicine and Western Medicine are complementary. Yoga originated in the East, but professionals in the West are embracing its benefits. Recent research contributes to the theory that seniors feel better by simply relieving symptoms that present themselves in several common disorders.

Seniors & Yoga. Fitness experts believe that yoga is one of the best tools for combating the negative aspects of aging. With seniors, it can be used to reduce health concerns and increase mobility. It reduces or helps alleviate several health challenges, which means it is easier for seniors to adopt this form of therapeutic exercise.

Yoga & Walking. Walking is a common fitness choice for the aging population. Researchers compared two groups of people over a span of 12 weeks. One group walked for fitness, and the other group participated in yoga. The results showed that there were no increases in GABA levels for the walking group. However, the yoga group showed increased GABA levels. In addition to this, their anxiety levels had decreased. In a separate study, patients suffering from chronic pain in their lower backs were studied. Over a span of 12 weeks, they also experienced increases in their GABA levels. Their pain levels were greatly reduced in comparison with the levels commonly seen in conventional treatment results.